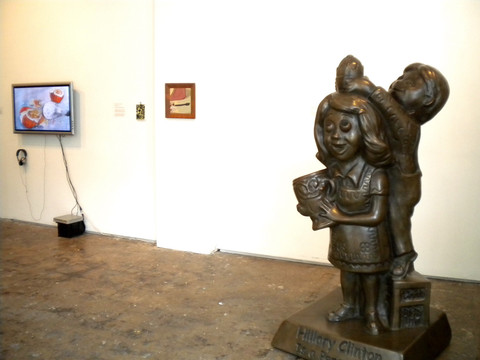 Jennifer's stop-motion animated videos often present satirical visions of the American obsession with their infinite array of consumer goods. In Buffalo-Milk Yogurt (2010), a male protagonist ventures out to the super market to acquire provisions with hopes of overcoming boredom and melancholy. He rather encounters an endless stream of foodstuffs promising happy eaters and healthy outcomes, effectively driving him over the edge.

Fuck Face pays tribute to 1989’s famed Billy Ripken “error card,” which captured Ripken swinging his “practice bat” and caused a flurry of white-out activity after published cards exposed an “expletive” written on his bat’s end. A hoax of sorts to begin with, Ripken now contends that the publisher actually enhanced the text’s image with hopes of capitalizing on the trading-card scandal’s publicity.

Invited to participate in a small-works show, Joey proposed Greeting (2002), a holiday card. Once a collector purchases this greeting card, Joey has arranged for the oldest remaining relative of a Cincinnati Red, Carole Lannom, (great-great niece of Bid McPhee (ca. 1870)) to sign it; thereby transferring the artwork’s value onto that of a hometown “celebrity’s” signature.